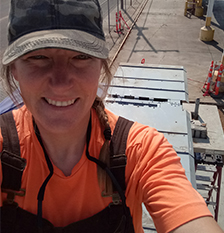 Alexis Rowberry arrived in the Fresno area with little more than her two children, a few suitcases and the dream of a better life.

Rowberry, 36, found a way forward in the Multi-Craft Pre-Apprenticeship Program offered through a partnership between the Fresno Workforce Development Board and the Fresno, Madera, Kings and Tulare Counties Building Trades Council. Today, the single mother is an apprentice in the local IBEW and steadily working on projects ranging from a solar farm to a school’s air conditioning remodel.

“I think it gave me an opportunity that I wouldn’t have had otherwise,” she said of the pre-apprenticeship program. “It really changed my life. Now when my kids ask for something, I can get it for them.” Rowberry has come a long way in a short time. After leaving Kentucky and an abusive relationship, she moved closer to family in the Fresno area in hopes of starting a new life. It was more than tough, and she lived in a shelter for a while.

Though Rowberry had an associate’s degree in accounting, she couldn’t find a job that paid more than minimum wage. She was interested in the electrical trade and decided to take the IBEW test. She didn’t pass. Rowberry then applied for a different training program but said she was denied because she was living in a shelter. She decided to call the IBEW, and that’s where she learned about an upcoming pre-apprenticeship class. She applied, enrolled and graduated from the six-week program in October 2019.

“The class was great – getting to know each individual trade and their personalities,” said Rowberry, who was one of two women who enrolled and graduated. “I kept an open mind. It was very hands-on, very informative.” The electrician’s trade remained her clear preference. After graduation, Rowberry took a temporary job to wait for an apprenticeship slot. When the IBEW called in January and invited her to sign the paperwork, she cried with joy.

Since then, Rowberry has worked on two projects in the Lemoore area. She felt prepared for the work and is learning even more on the job. “I still love it,” she said, and has recommended the program to a friend and her children’s father. The training has helped give her stability, friends and the security of a good-paying profession. She’s moved into an apartment in Clovis – one that she can afford on her salary alone. And it wasn’t a financial crisis when Rowberry’s car got a flat shortly after she started work.

“That first paycheck, I needed to pay for new tires,” Rowberry said. “I went out replaced them all. It was nice.”

MENU
This WIOA, Title 1-financially assisted program/service is an equal opportunity employer/program. Auxiliary aids and services are available upon request to people with disabilities and/or limited English. To learn more about Equal Opportunity click here.