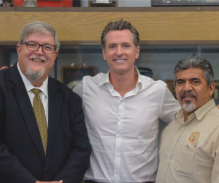 More than a decade ago, a partnership of Fresno-area labor and workforce leaders launched a pre-apprenticeship training program introducing students to careers in building and construction trades. The innovative classes were backed by real-life career and apprenticeship opportunities. The Multi-Craft Pre-Apprenticeship Program became a national model – earning praise from leaders like Gavin Newsom — for helping train skilled workers for the demands of California’s construction projects. Now, through a new grant, hundreds of job-seekers in the state’s vast heartland have a fresh opportunity to learn building and construction skills that translate into good-paying jobs and stable careers.

Over three years, the ValleyBuild Partnership will recruit students in 14 counties through an ongoing collaboration between the trades, regional workforce boards and other partners. The Fresno Area Workforce Investment Corporation is the fiscal agent for the project.

The inaugural class started in Fresno in September and other cohorts will roll out across the region over the next few years. Roughly 275 people are projected to enroll in pre-apprenticeship training over the life of a $1.56 million state grant; partners will contribute an equal matching amount. Grant funding comes from Senate Bill 1, a state transportation initiative focused on rebuilding and improving California streets, freeways, bridges, transit and other transportation corridors. A portion of SB1 is devoted to workforce training programs such as ValleyBuild, and the Multi-Craft Pre-Apprenticeship Program is a well-known prototype.

Blake Konczal, executive director of the Fresno Regional Workforce Development Board, talked about the grant’s significance by drawing a comparison to “flyover” country – the space between the Pacific and Atlantic seaboards – and the view of the Valley as “drive-through” country. “Our tax money funds the public works infrastructure that allows that drive-through,” he said. “It’s huge that a portion of that funding – through SB1 — has been dedicated to training people who live here to work on those public projects. It’s a dramatic shift in mindset for the state. It means that we are worth more than just driving through. This creates concrete opportunities for us to train and place our residents in construction jobs that — if not for our training — would go to more populous areas of the state,” Konczal said.

Chuck Riojas, financial secretary/treasurer of the Fresno, Madera, Kings and Tulare Counties Building and Construction Trades Council, said the new grant will help more people move from workforce readiness to apprenticeships – and careers. “Apprenticeship is that access to a living-wage job,” he said. “The SB1 grant means more opportunities for more people to join the middle class. If you have a strong middle class, then you have a stronger society.”

The ValleyBuild model is mainly rooted in the training program started in Fresno more than a decade ago. Relying on a wide variety of grants and funding sources, it quickly expanded in size, geography and success. The numbers are impressive. The program boasts a nearly 92% success rate with 356 of 389 participants successfully completing the training. More than 75% of those who finished (with closure) found jobs after the class.

That success has attracted the attention of top leaders like Governor Gavin Newsom. As a candidate for the office in July 2018, Newsom toured the International Brotherhood of Electrical Workers Local 100 training center, spoke to program graduates and praised the trades/workforce partnership. “This is an awesome program,” he said. “I think this is exactly the kind of program that we need to be promoting, investing in and embracing.”

Newsom was impressed by the students’ stories and determination to build better lives for themselves and their families. “What they are guaranteeing on the other end is a living wage career, and that’s pretty profound,” he said. “That’s about not only their lives, that’s about their families’ lives – and they are strengthening their community in turn.”

The pre-apprenticeship training model was developed through a partnership of the area Building and Construction Trades Council, the Fresno Regional Workforce Development Board and The Rios Company. A series of grants – from Proposition 39 and other sources – gave labor and workforce leaders the opportunity to create and refine strategies that now are the foundation for ValleyBuild.

Pre-apprenticeship classes teach skills such as construction math and forklift driving. Students also have the chance to learn about and explore a variety of construction trades ranging from plumbing to sheet metal to electrical. In part, pre-apprenticeship training is an effort to prepare highly skilled workers for lifelong careers and a wave of public projects in the Central Valley. An early study showed roughly $36 billion in public infrastructure projects rolling out between 2010 and 2020 – including portions of California’s high speed rail project.

The numbers were eye-opening and offered more fuel for pre-apprenticeship training. “We immediately grasped at the opportunity that the report proved was here,” Konczal said. “That knowledge, along with the absolutely indispensable relationship with the Fresno, Madera, Kings and Tulare Building Trades Council, are the two essential ingredients in getting this training off the ground.”

Today, major infrastructure plans around the region — ranging from SB1-related projects to an expansion of Fresno’s airport to ongoing work at the University of California, Merced, for example – point to the demand for skilled workers. “I’ve been a big advocate of pre-apprenticeship programs for the building trades,” said Greg Vincelet, training coordinator for the Central Valley Mother Lode Pipe Trades Training Center in Modesto. “But one thing I don’t believe in is training just to train.” SB1 will open up new projects around the region and create new demand for workers. “We’re training ahead to prepare people for those jobs that are going to open up,” he said.

Additionally, one goal of the grant is to increase the number of women, minorities, disadvantaged youth, ex-offenders and other under-represented groups in apprenticeships and construction jobs.

Partners in ValleyBuild include the Building Trades Councils in the 14-county area; Joint Apprenticeship and Training Committees throughout the region; Multi-Craft Core Curriculum (MC3) providers; eight workforce development boards in the region; and community-based organizations (CBO).

MENU
This WIOA, Title 1-financially assisted program/service is an equal opportunity employer/program. Auxiliary aids and services are available upon request to people with disabilities and/or limited English. To learn more about Equal Opportunity click here.